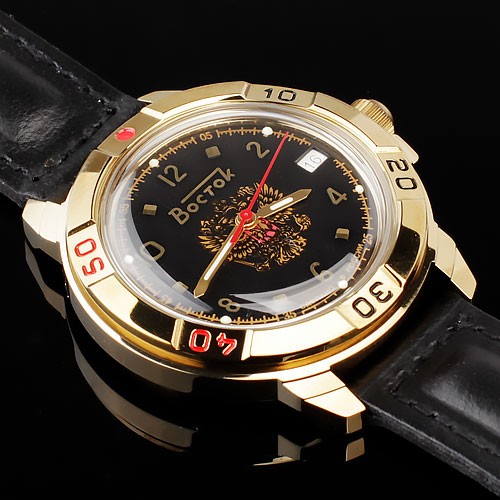 The Russian Watch the Vostok Commander, the Amphibian it is possible to purchase in our online store with fast delivery from Gremaniya to all countries of the world!
Nearly eighty years the entity issue the men's mechanical watch. The first chistopolsky watchmakers who are famous for the highest professionalism created in terrible military years when the plant issued clockworks for needs of the front, the principles of reliable and exact work. They also became obligatory for all subsequent generations of workers. Chistopolsky watchmakers the labor feat made the contribution to a victory of the Soviet people over fascism and recovery of the country.
With 1965 the Chistopol watch factory "Vostok" became the official supplier of hours for Defense agency. Hours are "Commander" as these chronometers began to be called, at once won recognition at regular officers because of the reliability and a practicality.
Today CJSC ChChZ Vostok — the unique watch factory in Russia having the complete (closed) cycle of production of clockworks and mechanical watch.
Distinctive feature of products of the East brand is their compliance to the European quality standards and the Russian price.
Our mechanical Watchs precisely counts time at any temperature, in any hostile environment, also overloads bear blows. For all years of work chistopolsky watchmakers not a jot didn't depart from the classical scheme - all models of mechanisms have so-called Swiss system of anchor descent, steel anchor wheels and forks, a support on ruby stones, clockwork hour springs from special precision alloys, the shock-proof device of a node of balance.
Work the chistopolskikh of watchmakers is noted by ten international and Russian diplomas and awards. It and the prize "Commercial Prestige" (France), "A diamond star" (Mexico) for quality, "The gold globe" (Denmark) for progress in business, "A gold eagle" (Germany) for the significant contribution to development of national economy and many others."
Be afraid of cheap Chinese counterfeits!